Love can do anything

September 25, 2006
I received an email from my brother forwarding a story from, oddly enough, Sports Illustrated. I'll copy it here.

From Sports Illustrated, By Rick Reilly

"I try to be a good father. Give my kids mulligans. Work nights to pay for their text messaging. Take them to swimsuit shoots. But compared with Dick Hoyt, I suck. Eighty-five times he's pushed his disabled son, Rick, 26.2 miles in marathons. Eight times he's not only pushed him 26.2 miles in a wheelchair but also towed him 2.4 miles in a dinghy while swimming and pedaled him 112 miles in a seat on the handlebars -- all in the same day(doing the Ironman Triathlon). Dick's also pulled him cross-country skiing, taken him on his back mountain climbing and once hauled him across the U.S. on a bike. Makes taking your son bowling look a little lame, right?

And what has Rick done for his father? Not much -- except save his life.

This love story began in Winchester , Mass., 43 years ago, when Rick was strangled by the umbilical cord during birth, leaving him brain-damaged and unable to control his limbs. "He'll be a vegetable the rest of his life," Dick says doctors told him and his wife, Judy, when Rick was nine months old, "Put him in an institution." But the Hoyts weren't buying it.

They noticed the way Rick's eyes followed them around the room. When Rick was 11 they took him to the engineering department at Tufts University and asked if there was anything to help the boy communicate. "No way," Dick says he was told. "there's nothing going on in his brain." "Tell him a joke," Dick countered. They did. Rick laughed. Turns out a lot was going on in His brain. Rigged up with a computer that allowed him to control the cursor by touching a switch with the side of his head, Rick was finally able to communicate. First words? "Go Bruins!"

And after a high school classmate was paralyzed in an accident and the school organized a charity run for him, Rick pecked out, "Dad, I want to do that." Yeah, right. How was Dick, a self-described "porker" who never ran more than a mile at a time, going to push his son five miles? Still, he tried. " then it was me who was handicapped," Dick says. "I was sore for two weeks," that day changed Rick's life. "Dad," he typed, "when we were running, it felt like I wasn't disabled anymore!" And that sentence changed Dick's life. He became obsessed with giving Rick that feeling as often as he could. He got into such hard-belly shape that he and Rick were ready to try the 1979 Boston Marathon.

"No way," Dick was told by a race official. The Hoyts weren't quite a single runner, and they weren't quite a wheelchair competitor. For a few years Dick and Rick just joined the massive field and ran anyway, then they found a way to get into the race officially: In 1983 they ran another marathon so fast they made the qualifying time for Boston the following year. Then somebody said, "Hey, Dick, why not a triathlon?" How's a guy who never learned to swim and hadn't ridden a bike since he was six going to haul his 110-pound kid through a triathlon? Still, Dick tried. Now they've done 212 triathlons, including four grueling 15-hour Ironmans in Hawaii. It must be a buzz kill to be a 25-year-old stud getting passed by an old guy towing a grown man in a dinghy, don't you think?

Hey, Dick, why not see how you'd do on your own? "No way," he says. Dick does it purely for "the awesome feeling" he gets seeing Rick with a cantaloupe smile as they run, swim and ride together. This year, at ages 65 and 43, Dick and Rick finished their 24th Boston Marathon, in 5,083 rd place out of more than 20,000 starters. Their best time? Two hours, 40 minutes in 1992 -- only 35 minutes off the world record, which, in case you don't keep track of these things, happens to be held by a guy who was not pushing another man in a wheelchair at the time. "No question about it," Rick types. "My dad is the Father of the Century." And Dick got something else out of all this too . Two years ago he had a mild heart attack during a race. Doctors found that one of his arteries was 95% clogged. "If you hadn't been in such great shape," one doctor told him, "you probably would've died 15 years ago." So, in a way, Dick and Rick saved each other's life. Rick, who has his own apartment (he gets home care) and works in Boston, and Dick, retired from the military and living in Holland, Mass. , always find ways to be together. They give speeches around the country and compete in some backbreaking race every weekend, including this Father's Day. That night, Rick will buy his dad dinner, but the thing he really wants to give him is a gift he can never buy. "The thing I'd most like," Rick types, "is that my dad sit in the chair and I push him once."

http://www.youtube.com/watch?v=ryCTIigaloQ
If you search "Dick Hoyt" inside of UTube there are several other short videos of this life affirming family.

This one is excellent: http://www.youtube.com/watch?v=D52rJd9GX10&mode=related&search=
Posted by Patricia Ryan Madson at 12:02 AM 3 comments: 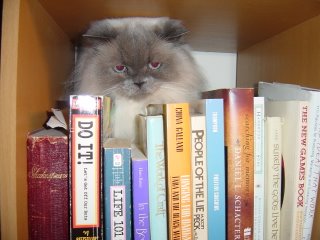 September 19, 2006
What surprised me was how hard his little body felt to the touch. The white cardboard box that they put him in had sloping edges--a little like a coffin. It felt not heavy at all, but solid. When I opened the lid, his long hair, dark grey and dirty cream seemed just as it always had: soft, well groomed, a gentle color. And, then, when I touched his side, the body, instead of yielding as it normally does, felt dense, hard. I suppose this is what "rigor mortis" means, although I had not ever experienced it before. Buddha was lying on his side, curled as he had been so often, sleeping--something he had done often in recent years, as his 14 year old body adjusted to indoor life with a pampering family.

Nothing prepared me for the loss of my beloved companion, our Himalyan beauty, his royal highness, the boy Buddha. This was his official name, the one on his "papers." He had a mother who was a show cat. We neutered him early on, never going that route.

And, now he is gone.

On Sunday night as I was drying myself from a shower I noticed him darting around, making strange patterns as he moved. One leg seemed to buckle under as he tried to change location. After each lunge he would raise his shoulders and retch forward. Something was clearly wrong. Between moves he would meaow furtively. Had he broken a leg bone jumping down from the sink where he drank from the faucet? I called Ron, who swept him up into his arms, cradling him.

What do you do with an animal that has a broken leg in the middle of the night on a weekend? Are there "Pet Emergency Wards"? Yes, fortunately, there are. But the closet one was a half hours drive over the hill and north toward the city. After calling the facility and getting directions we bundled into the car. I drove since Ron was good at holding the frightened, trembling body of our "boy." He cried out almost continually. At that time we didn't realize that it was likely from pain rather than annoyance at being held against his will. Halfway there he started panting with his mouth ajar, eyes wild, making little clucking sounds. Something profound was happening. My heart began to feel numb as the possibility that this ride might be his last occurred to both of us.

At the Emergency Pet facilty an attendant took him immediately and we waited in the dim anteroom, holding hands and worrying. A young Asian women with a perky short legged black dog was waiting for test results. Her pooch was peeing blood, she confessed. I must say he looked frisky and cheerful, if indeed he was sick.

At last we were brought back to wait in an examining room. Buddha was still cloistered somewhere being examined. After a very long time, a large middle aged, overweight woman in a blue dress came in and told us that the exrays showed that Buddha had had a stroke, and that the prognosis was poor that he would recover. "He is very likely to stroke again at any time," she said. He would need to be hospitalized and given intravenous pain medications and watched continuously, she explained without emotion. Of course our alternative was . . . we filled in the blank, "to put him down." I think that was what Ron said. He then remarked that this was such an odd incorrect phrase. Euthanasia, is the proper term. "Putting him to sleep," the euphamism. Ron and I looked at each other. We had discussed this long ago and had agreed that letting him go would be kinder than keeping him alive under duress and indignity if the time ever came. And it had come.

And, putting him to sleep was what it was, actually. We sat with him for a short time, stroking him and weeping quietly, saying goodbye to our closest friend. The vet, who never introduced herself, returned with several syringes. Buddha sat quietly with his paws extended, resting, a catheter on his wrist. With the first injection he became even more quiet. He was very still, calm, present. As if he was going into meditation. Other injections followed. And, he became more still and quiet and motionless. In a remarkably short time it was over. The vet, using a stethascope checked for a pulse, and simply nodded that it was over. I stroked him gently, feeling his little body still warm and soft. He just seemed to be sleeping. We were glad to have been with him.

We brought the small carton home and placed it on our altar in front of a statue of the Buddha and a photo of the Dalai Lama, set alongside photos of all of our family members who have passed on. On the following day we buried Buddha's body in our garden. The grave was placed under the garden statue of a meditating Buddha, one with a gentle smile. We planted cycleman all around the statue and bulbs deep in the earth so that in the spring we will see crocus and iris and frisia burst forth to remind us of our sweet friend. Buddha was a being of intelligence, grace, beauty and kindness. Everyone thought him remarkable. We loved this cat very much. We shall miss him.
Posted by Patricia Ryan Madson at 8:47 PM No comments: