Turning around the crazies 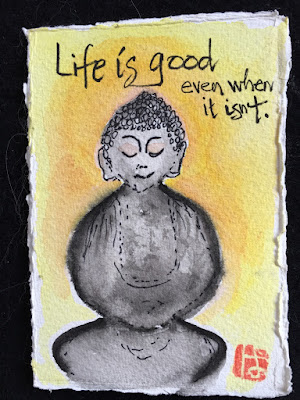 This was the third call to the Stanford University IT Computer helpline.  Isabella, my technical rep this round had been on the phone with me for just under three hours.  The issue was Stanford’s new Encryption software that is required of all users who have a sunet ID for the University’s email server.  As the world continues to go mad the pressure to secure our cyber identities goes up.  Stanford tries to stay ahead of the curve in Security precautions and programs that protect us from any kind of cyber terror.  While I don’t spend much time worrying about my data being secure (perhaps I should) I do always obey commands to update software and security protocols.  For reasons unknown installing the new encryption program on my MacBook laptop had become a nightmare.  The rep who was helping me continued to try new things to make the process go successfully.  Both of us began to take long, deep breaths attempting to still the rising anger and frustration that only a dysfunctional Apple device can provoke.  “All morning, I’ve spent all morning trying to make this procedure work.”  Each time we would go around the circle of downloads, proffering of logins and 24 character passwords, followed by the same set of questions asked and answered.  Nothing was working.  My devices manager continued to read “Non Compliant” no matter what we tried.

I was fuming and felt ready to pop off expressing my most profound annoyance at this personal inconvenience.  You know that moment when your blood rises, and you just want to let expletives fly!  But something different happened: instead of giving in to that impulse to vent my mind did a 360 degree turn.  I changed what I was noticing, and I began thinking about the gift of our technology. I began reflecting about what was right about this moment while we were attempting to solve the security issue. So, changing my voice I exclaimed to Isabella:  “Despite this glitch, aren’t we lucky to have this amazing technology?  Isn’t the Internet a miracle?  Aren’t we blessed to have computers and the ability to connect and find the world’s bounty of information and knowledge?"  As I spoke I could sense immediately Isabella’s mood and voice change.  “Yes,” she declared cheerfully, “it is a miracle.  All that Stanford provides us with is such a great gift.”  We both clearly began to feel better and our former annoyance had been replaced by wonder.  Of course, the technical problem didn't disappear, but our relationship to it had made a dramatic shift.

I hope I can remember this “technique” if you can call it that.  When I feel ready to burst with anger and frustration instead of giving in to that useless emotion I should turn my mind to a catalogue of what I am receiving at that moment.  What are the everyday wonders and miracles that sustain us and console us and enrich our lives?
Posted by Patricia Ryan Madson at 12:35 PM No comments:

The Four Friends and Teamwork 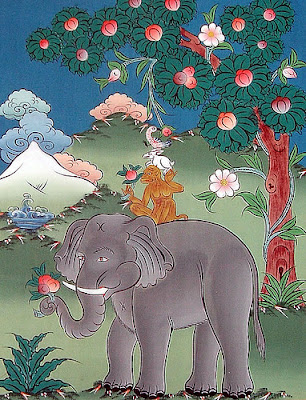 Bhutan is a tiny country with a big heart.  One of their claims to world fame is the adoption of the concept of “Gross National Happiness” as the governmental measure of all things good.  The quality of life is prized over material wealth.  When I visited this cultural paradise in 2011 I kept noticing an image that was everywhere.  It’s the picture of “The Four Harmonious Friends” and it’s a symbol of the importance of cooperation.  I brought home a hand painted thanka with this image because I wanted to be reminded of this story. The values represented in the image are of key importance to the Bhutanese. It is often seen in Buddhist iconography as shown here.

The story of the four friends recounts how working together can produce not only harmony but also sustenance. Their combined forces allow them to obtain a continual supply of food. The peacock on top first found a seed and planted it in the earth.  The rabbit watered it, the monkey fertilized it and the elephant guarded it. When the fruit was ripe the tree was so high that no one could not reach the top on his own. The four animals made a tower by climbing on one another’s backs, and plucked the fruit from the high branches.  Then they shared the bounty.

Teamwork leverages both individual gifts as well as acts of cooperation.  As an improv teacher I am often called upon to help cultivate and develop teams.
It is often a focus in the study and practice of improvisation. In their recent bestseller Team Genius, Rich Karlgaard and Michael Malone’s make the scientific claim that teams with diversity are more likely to perform successfully.  The quality most needed in our changeable world is that of maneuverability. In their words: “Maneuverability is the capacity to turn, even reverse direction, quickly, to deal competently with whatever new change—technology, market opportunity, or competition—has just burst onto the scene, and to do so without losing internal cohesion and breaking up.” (p. 70)

Improv teaches maneuverability.  Scenes and stories happen in real time and actors must be alert to new directions; they must change on the dime in order to make sense out of the moment.  There is no time to stop and have a committee meeting to vote on some possible future.  Improvisers create the future in real time, using their individual gifts and talents while pulling together to “get to the top of the tree to pluck the fruit.”
Posted by Patricia Ryan Madson at 4:42 PM 1 comment: