The photo below was posted on Facebook by my good friend and Japanese translator, Tomoko Nozu.  The pile of stuff comes from a package I mailed to her in thanks for a favor she did for me.  I was in search of some red stamp pads to use for my etegami art work.  These ordinary stamp pads are everywhere in Japan, but for some odd reason not easy to locate in the USA.  She very kindly (and swiftly) answered my request and mailed me some perfect stamp pads.  So, in thanks I assembled this assortment of tiny gifts.  She said she liked stamps, so I sent a page of current USA stamps along with some chocolates from the local farmer's market and a laminated bookmark (in the back) made from canceled used stamps from around the world.  I recently learned that this small packet of gifts created considerable trouble for her.  The story is a testament to how we use time.  See below.  Oh, the Japanese is her post that accompanied this photograph.) 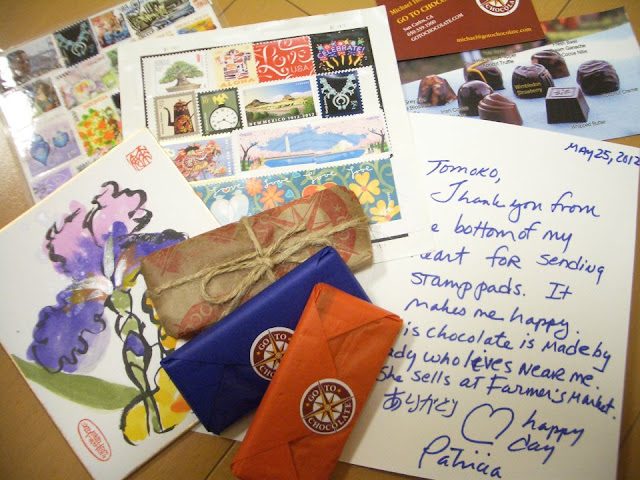 How we use our time


The items in this photo were part of a small "gift packet" air mailed to Japan a week ago.  Tomoko tells me that there was a slight hitch in receiving it, however.  Instead of having it delivered normally to her mailbox at home, she received a notice that a package addressed to her had reached Kyoto and was sitting in Customs at the airport for her to come and pick it up.  Apparently there was some "trouble" with the package.  The airport is not really close to Kyoto proper, so Tomoko went on something of a long journey just to get to where the Customs office resides out in the "boonies."


When she finally found the office and someone who could pull up her "offending package" she discovered the problem.  It seems that several of the canceled stamps which were part of the laminated bookmark were from North Korea.  And, since North Korea and Japan do not have diplomatic relations nothing from that country is permitted to be shipped into Japan.  So, these old stamps, which were currently being used as "art" were disallowed.  I'm not exactly sure just what happened.  Perhaps they cut the "bad stamps" off of the laminated bookmark and allowed her to keep the rest.  Or perhaps she was fined or something . . . at least she did get to keep the chocolate and the art cards I'd sent.


It all struck me as incredibly amusing and such a waste of human effort.  I certainly "get it" that countries have lists of "forbidden things" and this tiny object was on this NO list.  What possible harm could come of some used North Korean stamps finding their way to suburban Kyoto?  Perhaps they just needed to be sure my friend wasn't a spy or something and that this gift was not in code.


At all events, she took it in stride and wrote the kind thank you note to me.  So let this story be a cautionary tale.  Be careful what you do with used North Korean stamps.  Isn't life funny   sometimes?

Here is a line of cards ready to go into the mail today.

Posted by Patricia Ryan Madson at 10:02 AM No comments: