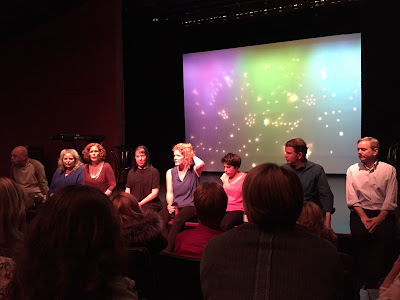 Stories Starring Women
The Bechtel Test
Celebrating the Everyday life of Women
Something monumental in social and artistic history happened last night.  Despite my body being on Greenwich Mean Time from a month in the UK I awoke before dawn in California this morning with the sure knowledge that I needed to write about last night’s triumph at BATS.

Lisa Rowland, fast becoming a major voice, player and teacher of improvisation on the west coast and internationally, produced and directed a two night run of improvised stories about women.  She assembled a seasoned and talented cast of seven improvisers, including veterans Rebecca Stockley and Barbara Scott. Representing the Millennials was Lisa herself and Rebecca Portesky and Kimberly Maclean.  As supporting members of the ensemble she chose Dave Dennison and William Hall.  Seven improvisers bounded on the BATS stage with the promise of exploring how a few guidelines which tilted the balance of power in the direction of women might result in an evening’s entertainment before a live audience.

For anyone reading this who is a follower of improvisational theater in the Bay Area (and worldwide) knows there is groundbreaking artistic work being done here.  Among the dozens of long form theater groups experimenting and evolving new forms are the notable “3 for All,” “Awkward Dinner Party,” “The SF Improv Playhouse,” the LA based ”Impro Theatre” and “Noir Unscripted.” These currently active groups are part of a succession of twenty years of development in theatrical forms preceded by “True Fiction Magazine” and “Pulp Playhouse” to name only a few.  Someone needs to write the history of this movement, which is largely unknown to the wider theater going community.  Even in enlightened environments such as Stanford University “improv” is still looked upon as that comedy stuff.  This is a topic for a longer piece, but I need to return to the purpose of this essay: to talk about Lisa Rowland’s experiment this weekend.

Her company of improvisers, including the legendary musician, J Raoul Brody and lighting improviser Ana Nelson, did something last night that I had never seen in 50 years of theater going.  I may overstate this when I say that the “holy grail” of long form improv is to create authentic theater capable of bringing an audience to tears, touching the heart and mind and delighting us all with its freshness and clarity.  In the past year I have seen increasingly skillful work that has moved the genre of long form into a new level.  Last night tears flowed as I watched a group of ordinary characters, women, who were struggling with everyday challenges.  In the two-hour performance no one got shot or blown up.  No one screamed and raged for attention or power, and mostly everyone got along.  The agonies and triumphs were little things . . . like overcoming social anxiety or accepting the imperfections of ones parents.  Characters talked to each other, often quietly.  I never once noticed an improviser going for the quick joke or laugh.  What was riveting to me was just how dramatic ordinary life (among women) could be.
There was a kind and persistent boyfriend played by William Hall who gently worked to give his intended “space” in order for their relationship to continue.  In another simple scene Daisy (Kimberly MacLean) has an audience with a kindly banker, played by Dave Dennison.  She is seeking a loan for a business venture to build a community center for at-risk youth.  Her unabashed surprise when she gets the loan of $40K was moving.  Characters mostly helped each other and listened to one another.  The entire arch of the show was character rather than plot driven.  This choice provided spaciousness for everyone to be themselves and share the stage with a series of “ordinary miracles.”

Rebecca Poretsky’s character, Wally was a scientist with a lot of control issues.  A particularly skillful scene was a meeting with her graduate assistants to discuss research.  Each character seemed fully developed and involved.

Near the end of the story a particularly moving scene involved the two aging sisters, Annie (Rebecca Stockley) and, I think it was Maureen played by Barbara Scott.  Maureen leads Annie into her room with the line.  “Come sit down, I need to ask for your help.”  After a long pause, she continues:  “I’m dying, Annie. And, I need a kidney.  You are a match because of our DNA.”  And, Annie throwing her arms around her sister, begins a deep and soulful acceptance of this offer.  “Of course  I will.  You NEED me.  That is the most important thing in life: to be truly needed (sobbing into her lap)”  (I fear I do disservice here to the actual dialog but I hope you will forgive me.)  It appeared to me that Rebecca’s character had real tears flowing too.

And, before I leave the impression that crying on stage or in the audience is the summum bonum let me say that this emotional reaction is just a measure of the kind of human story that was unfolding on stage.  Lisa’s show parameters provided a crucible for these kinds of stories to be told.  In the after show talkback we learned that the “rules” governing this run were simple and hearkened to the Bechdal Test.

1.     These would be scenes and stories by and about women who talked to each other
2.     The structure began with three monologues
3.     All characters would be living in the same contemporary time zone
4.     The two men in the cast would play supporting roles only

The result of these restrictions was dynamic.  Until we encounter its opposite we cannot really know how a cultural bias (e.g.  Dramatic stories are about men.) is skewing the onstage world.

The improv stage for long form ensembles has always struck me as a political space.  Five players get an audience suggestion and begin constructing a play in our presence.  Who becomes the hero, the villain, the sidekick, the foil?  Usually in the first five minutes of a show there is a subtle power grab for who will dominate or control the evenings destiny.  Over the years I have watched with interest how some actor/improvisers are “drivers”  . . . that is, they tend to dominate the space.  Over time it has been a pleasure as an audience member to see many of these “givens” change.  What fun to see a player who usually grabs the spotlight now “hang back” and serve the narrative as a support instead of a primary.  Looked at carefully all of this jockeying for control onstage is a natural part of the art form.  In “The Bechdel Test” last night the two male cast members were simply instructed:  “Play support.”   William Hall mentioned that this instruction gave him a new perspective.  As a performer he could actively choose NOT to take control, no matter how interesting his idea might be.  “Stay in your place”  was a helpful guideline.  And, once this agreement was in place the five women could breathe deeply and see what developed between them as the stories unfolded.  The result was deeply satisfying.

Perhaps as a woman audience member I’ve had a longing for women’s stories that I didn’t even know existed until last night when this dream was fulfilled.  Thank you Lisa for your vision and for creating an environment for us all to see the power of women’s stories honestly told.  Looks like you got an A+ on your Bechdel Test.  I’m looking forward to seeing more.

Posted by Patricia Ryan Madson at 10:20 AM No comments: