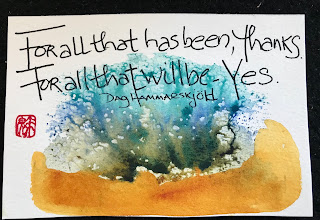 This article was first published in the 1989 edition of Flowing Bridges, Quiet Waters, edited by David K. Reynolds for SUNY Press, Albany

Patricia Ryan lives in San Francisco and teaches drama at Stanford University.  She is certified to practice Morita guidance.

Posted by Patricia Ryan Madson at 2:54 PM No comments: 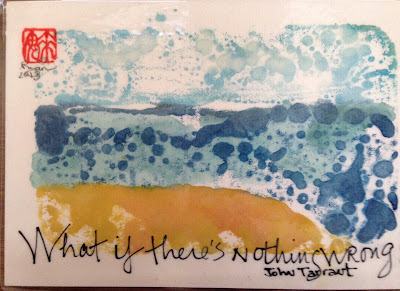 “If something is not to your liking, change your liking.”
Rick Steves

The first thing I noticed as I swiped my entry key into the Snap Fitness Gym this morning was that “thatguy” was on the treadmill again today. He’s the one who pounds the moving tread at a ferocious beat for over an hour whenever he’s in the gym.  His footfalls are so loud and jarring that everyone in the gym takes note of his sweaty workout.  You can’t even hear the blaring elevator rock and roll they play when he’s running at top speed. It’s very annoying.

And my reaction to that annoyance is what this essay is about.

Life seems to come at me with discreet valences.  Without actually thinking about it I seem to code the moment with a score.  This coffee tastes good.  This bagel is stale. I’m not interested in that reporter’s story.  I’m happy that the sun is out.  I’m perturbed that my husband has his music turned up loud.  Without even being conscious I notice that my preferences/likes and dislikes are always at work.  There’s a plus or a minus or a neutral sticker on everything.  It’s virtually impossible to experience life in a mindful but not judgmental way or to let the world in without a score. In particular those events, experiences and people who are in the minus column seem to loom large.  A stranger’s behavior, like the heavy-footed jock in the gym, can put me in a lousy mood in no time at all. A thoughtless driver pressing on my bumper can fill me with black thoughts.

Until this morning it never occurred to me that I may be able to do something about this.  While I can’t change or stop Mr. Pounding foot, it may be possible to change how I react and even how I feelabout this.  So, I did an experiment today.  I wanted to see if I could turn around my annoyance.

John Tarrant, Zen teacher and enlightened author poses the koan: “What if there’s nothing wrong?”

In order to change something about how I feel or think first I must notice what is going on.  This may take the form of stepping back and putting a name on my feelings.  Something like this:

1. “I notice that I am feeling tense and annoyed and even a little bit angry over this fellow’s behavior. His loud pounding of the treadmill offends my ears and disturbs my concentration and enjoyment of my workout.”

2.  Having identified the pile of negativity growing in me I am able to separate these thoughts and feelings.  I can step back or lift off from them. I can examine them.  It might be something like “I notice I’m getting angry over this.”

3. Instead of entertaining the annoyance and building details I apply the Tarrant koan: “What if there is nothing wrong?”  I let this proposition ruminate for a bit.

4. I notice a shift in the voice that had been burning with annoyance. The gym mate is still pounding the treadmill loudly but now it is simply part of the ambient noise of the gym. It is no longer a personal assault on my wellbeing.

5. I turn my attention to my own workout and observing the morning news on the monitors.  My anger has been neutralized.

Rick Steves’ sage advice to “change your liking” now becomes a real possibility.  Try it sometime:  Getting angry? Lift off and suggest whatever is happening is simply happening.  It’s not about you anyway.  “What if there’s nothing wrong?”

Posted by Patricia Ryan Madson at 3:27 PM No comments: