Late for the Train 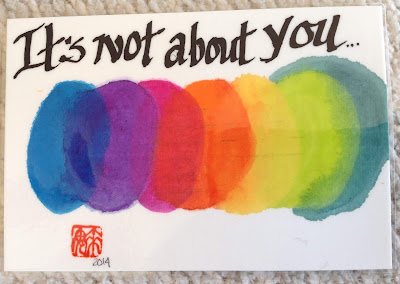 Late for the Train, an essay on selfishness

When a student called that morning to reschedule his appointment it offered me a window of time that I hadn't counted on.  Mentally running over my list of "What needs to be done today" I remembered that I had promised my husband that I would retrieve some IRS forms from the Federal Building downtown.  Normally I drive everywhere, but because of this gift of extra time I decided I would combine two purposes: pick up the forms and learn something about the public transportation system in our area.   We had just moved to a neighborhood with great access to public transport.  It made sense to learn how to get around on it.  I had picked up a tram schedule at the library but hadn't bothered to consult it before leaving the house.

I knew where the electric car stopped on a platform in the middle of Ocean Avenue.  As the street came in sight the "K" cable car was already approaching.  Several dozen passengers were waiting to board.
"Only two blocks away.  I think I can make it," I thought.  I set off running fast.  I arrived at the sidewalk directly across from the stop just as the last passenger was boarding.  The driver saw me and knew I wanted to board, but the light changed and a stream of motor traffic now moved between us.  I motioned to the cable car driver to stop, but there was no break in the traffic.  Finally, the driver glided away leaving me standing on the sidewalk flushed and disappointed and angry.  Neither the automobile traffic nor the cable car driver had stopped for me.  "After I ran all that way it wasn't fair that the driver didn't wait!"  I grumbled to myself.

When it was safe I finally crossed to the median strip and stood there flush with all my "stuff" about this moment.  My hear pounded, lungs pumped from the run and the frustration.  A big deal.  Or was it?

After noticing this self righteous monologue I began to think of Constructive Living's three reflections on what I have received, what I have given, and what trouble and bother I have caused in these moments.  Immediately the third theme demanded attention.  I was the one causing trouble in this situation.  By being late for the tram and insisting on boarding anyway I had inconvenienced the driver.  Indeed, he had actually paused longer than required to give me a chance.  I had troubled automobile drivers as I pranced and waved trying to get them to stop so I could get across the street.  Furthermore, I had inconvenienced all the other passengers who had been on time and were already aboard.  This new perspective took the wind out of my sails.

I became sharply aware of the tenacious way in which I cling to the notion that whatever I am doing is proper and anything that impedes my progress is the problem.  Stopping to ask the Constructive Living questions borrowed from Naikan allows me to see that my personal needs and goals are just one part of a larger reality.  So viewed I become one of the supporting characters in Reality's play.  Without this view life is no more than an endless monologue titled "The World According to My Desires."  Constructive Living reflection helps me drop that adolescent and selfishly simple misconception.  Situations are complex and rich with others' desires as well as mine.

Taking a clear look at my ongoing selfishness is a bitter but instructive experience.  The truth is that I AM selfish.  Acknowledging that specific moment of my wanting ALL traffic to stop for ME and Everyone to wait for ME to board the bus is part of my practice of CL.  I have little expectation that I will ever extinguish my selfish impulses.  Perhaps with CL's Naikan reflection I shall see them more clearly and save myself time and energy repeating stories of how the world has troubled me.  This practice allows me more time to "smell the roses" and the pumpernickel bread and the exhaust fumes from the buses and cable cars that serve me every day.  Perhaps next time I'll check the tram schedule that the public library provided for me free.  Then I can arrive at the stop in time to notice the expressions on the drivers' faces and the colors of the passengers' clothing.