The influence of Peter Brook 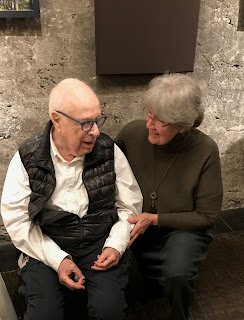 Manuscript of Peter Brook: A Survey of His Directorial Achievements, 1968

It was New Years eve over fifty years ago. I remember it clearly. The new year 1966 was about to be heralded in all over Manhattan. Outside Times Square was packed for the dropping of the ball.  But I was not out celebrating. I was sitting in my third row center orchestra seat in the Martin Beck Theater on Broadway ten minutes after the house had cleared. The orchestra was now empty following the performance. An occasional usher was checking under the seats for programs or debris. I was still sitting sobbing gently and my whole body was shaking.  Trying to understand my state the word ‘catharsis’ came to mind. I felt fundamentally changed. The theater as a vehicle for transformation seemed obvious now. What had happened?  The final notes of  Richard Peaslee’s music still hung in the auditorium. Kokol spoke directly to me and screamed: “When will you learn to take sides?” I found this a personal message.

I had to speak with someone connected with the production.

Still shaking and with tears running down my face I made my way outside and to the backstage door and knocked.  A stage manager opened it and seemed surprised on seeing a 23 year old woman, clearly in extremis.  “Can I help you?” he said, with concern in his voice.  “I need to speak to somebody in the company please,” I begged.  I expect that my emotional state was justification for him to invite me backstage.  He ushered me down the hall toward the dressing room for Patrick McGee and Ian Richardson, the stars of the play, The Persecution and Assassination of Jean Paul Maret as Performed by the Inmates of the Asylum at Cheranton under the Direction of the Marquis de Sade which had been directed by the incomparable Peter Brook. The play was in its final week of previews and I had scored a ticket out of great good luck or by providence.

Ian Richardson opened the door to his dressing room and seeing me still sobbing, almost shouted:  “What happened to you?”  .  .   .   “I just saw YOUR PLAY,” I blurted out.
He and McGee actually laughed and then he said:  “Looks like you need a drink.” And he went over to a bottle of Scotch and poured some into a paper cup.  I think I began babbling something about how much this had affected me. I didn’t stay long and I don’t remember much more about that moment except to say that these two world famous actors were very kind to this crazy lady who was still under the spell of their profoundly disturbing and inspiring production.

It’s not hyperbole to say that this play “changed my life.”  The injunction to “take sides” led me to become actively involved in political action around the civil rights struggle that was going on in the South were I lived.  Segregation was being challenged, and I knew that I had to go back to Virginia and do something to help the cause.  I chose to put together a mixed race acting company to perform a Readers Theater production of “In White America,” a docudrama about civil rights issues.  It was intended to instruct as well as open up the conversation about race.  Just traveling together in the same vehicle provoked stares and the occasional rude remark or gesture.  Lunch counters were still segregated in most of the South, so our little group of integrated players had many challenges.  I had to take sides.

I was in graduate school at the time all this happened, and I was making decisions about what to do with my life. This experience of feeling the enormity of theater in Marat/Sade was the cause of my decision to pursue theater as a career. From a meta perspective, I learned that theater could have the power of atomic fusion.  And so strong was my interest in this particular theatrical event that I chose to write my Master’s Thesis on the achievements of Peter Brook, who was then a rising star at age 43.  Peter’s father, Simon Brook kindly invited me to his home to peruse his mountain of scrapbooks with articles about his son.  A link to this ms is at the beginning of this article.

A few years later I met up with Brook at the Roundhouse when he was in the final stages of rehearsing The Tempest.  I made the acquaintance of Yoshi Oida with whom I studied in Paris in the summer of 1984. A few years later I marveled at the magic of Brook’s A Midsummer Night’s Dream and the spiritual message of his Mahabarata which I saw in LA.

In the nearly half century since I saw Marat/Sade the world has spun on a new axis.  I wonder what we would make of this experience if the play were produced today? I know it still speaks to us.  I have a deep gratitude to Peter Brook for his visionary leadership.   I admire that he has always been a seeker. His work raises the level of the art into the realm of the spirit.

Thank you, Peter Brook, my own career was inspired by your work.  I am grateful.
With appreciation and respect,