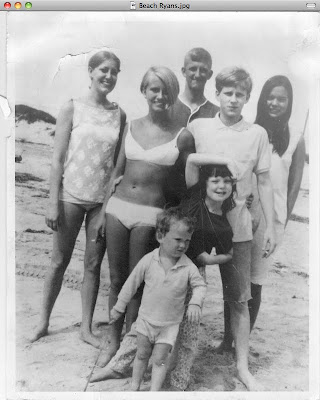 This photo, circa 1965, was the single photo ever taken of almost all of the Mike Ryan children, steps, halves and wholes.  From left to right:  Patricia Louise Ryan, Kathleen Nayr Ryan, H. Michael Ryan, III, Brent Drummond,  (not sure about the girl with dark hair)  could it be Brenda Drummond? Down in front are Timothy Ryan and Juliette Kincaid Ryan.  Brent and Brenda Drummond were children of Betty Ryan, my father's second wife.  (Third marriage, but second wife.).  I believe that this photo is missing Brenda Drummond, my stepsister.

On the day that I post this the Ryan clan is descending on Virginia Beach, VA for a week of family reunion.  Patricia, Kathleen and Michael from this photo and their spouses and children are coming from far and near to dip toes in the Atlantic and tell family tales.  Picture of this family reunion to follow.

The Ryan's rule!
Posted by Patricia Ryan Madson at 5:30 AM