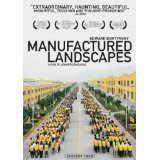 The CBS evening news last night did a feature on modern China.  It was an upbeat report on China's optimism and high energy.  All I could think of was a film I saw a few years ago that has made a lasting impression.  Canadian photographer Edward Burtynsky's film MANUFACTURED LANDSCAPES must be seen.  I cannot praise it highly enough.  It's easy to find on Netflix or at a video store.

Manufactured Landscapes works triple-time as a documentary portrait, a tone poem, and a work of protest. The title comes from Canadian photographer Edward Burtynsky's 2003 book of the same name. His large-scale images depict the ways industrialization has transformed the environment. Locations include quarries, slag heaps, and dumping grounds. Director Jennifer Baichwal (The True Meaning of Pictures: Shelby Lee Adams' Appalachia) introduces photographs focusing on China and Bangladesh, and then presents Burtynsky in the process of creating them. He adds a few words here and there, but Baichwal mostly lets the people behind his prints--and the devastation that surrounds them--do the talking. Of the sites they visit, China's monumental Three Gorges Dam is the most impressive... and depressing. At the same time the construction has created much-needed jobs, the world's largest engineering project has also displaced 13 cities of over 1.3 million people. To paraphrase Burtynsky, Baichwal's film "searches for a dialogue between attraction and repulsion." With its ominous soundtrack and stately pace--cinematographer Peter Mettler's opening pan through a vast manufacturing plant lasts eight minutes--Manufactured Landscapes is about as far from conventional as a non-fiction film can get. Like Koyanisqaatsi, Rivers and Tides, and Darwin's Nightmare, Baichwal leaves the charts and graphs behind to make one irrefutable point: We're in trouble. Extra features, like deleted scenes (with commentary by Baichwal) and an extensive slide gallery (with commentary by Burtynsky) add welcome context.
Posted by Patricia Ryan Madson at 8:38 AM