In a New York Times article today the pollsters tell us that the majority of Americans are not thinking realistically. We have become a culture of entitlements.  Everyone wants to keep full benefits for Medicare and Social Security at current levels and the the same everyone doesn't want higher taxes.  We want our cake and eat it too.  Or the article is telling us:  We have a budget deficit because people want everything and they don't want to pay for it.  I think that this view of "have it now and pay for it later" is one of the most insidious aspects of our national debate, if you can call it a debate.  Credit card debt is at an all time high, and the prospect of delaying gratification for something we want seems not to be an option.  I am fond of telling the story of "Lay Away" and its rewards.  Here is an article I wrote. 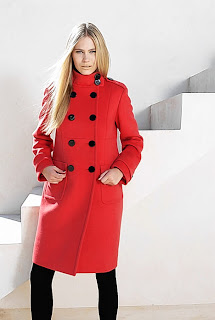 Layaway
The coat was red wool with large, tortoise shell button.  The collar could be turned up for both style and to protect against the wind-chill that blew in the winter in Virginia.  I wanted that coat badly, and thought about it almost continually.  I’d seen it first in the window of Lerners, a retail clothing store for women and girls on Broad Street in Richmond.  The prices there were lower than those at Thalhimers or Miller & Rhodes and significantly lower than the coat prices at Montaldos, a swanky women’s salon.  My mother had sometimes modeled at each of these fashion centers in Richmond during the 1950’s and 60’s.  I can’t remember if she owned any clothing from Montaldos.  I don’t think she did, although she always appeared to be elegantly dressed.
Lerners wasn’t the kind of shop that had fashion shows.  But they did have layaway.  Layaway was the working girl’s friend.  Five dollars down and four dollars a week, if you could manage it.  At $35.99 it would take nine weeks to “get the coat out.”    This would  work out perfectly for me to wear the coat to church on Easter Sunday, that is, if I was faithful in making my payments every week.  When you brought the item up to the clerk, she would carefully wrap it in a “layaway package” and attach the paperwork to the package.  “February 10, 1958, Layaway for Patsy Ryan,  2812 Monument Avenue, Apt 3.  Red Wool three quarter coat, number 34771, $5 down.  Customer agrees to pay $4 a week until the debt is paid off, at which time, the coat can be picked up by the customer.  If the payments are not made in the agreed upon time frame, interest in the amount of 9% a month will be added to the price of the purchase.”
In the fifties there were no global credit cards.  The wealthy and some of the middle class were beginning to own department store cards.  However, credit for the masses wasn’t even a glimmer in a banker’s eye yet.  This system built character, taught fiscal responsibility (hello, legislators where are you?) and created incentive to save.  Saving is what responsible folks did in those days.  Buying something you had no way of affording was inconceivable.
I grew up with this sensible way of handling the acquisition of “things.”   I would like to suggest that we bring back layaway.
Posted by Patricia Ryan Madson at 12:37 PM