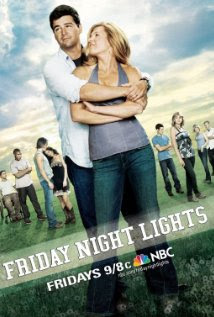 Five years ago I began watching a weekly tv drama called Friday Night Nights.  It is set in Dillon, Texas in our time.  The story revolves around the lives of a high school football coach, his wife who was a school counselor (and later a principal), his family and the individuals on the football team.  The extended family includes other parents, girlfriends, siblings and school personal.

I fell in love with this show from the beginning. The acting is realistic.  The stories are true to life, and the morality is something greatly to be admired.  Real men and women struggle with change, conflict, growth, dreams, sexuality, religion and the basics of life in a rural small town where the Friday night high school football game is the most important thing going.  The characters became friends and family, and I watched every episode for the five years . . . some of them many times.  While it never garnered a large media audience it developed loyal fans and began to win coveted TV prizes for excellence.   Direct TV had a special deal which allowed it to show the final year during their fall lineup.  So, I got to see the series finale last week.

I can't remember when I have had more emotion watching a drama.  The writers very kindly gave their public what they wanted: resolution to many of the issues and outstanding questions.  Couples got together.  The coach made a stunning decision to follow his wife's career and the promise of a new football world in the town of Dillon was given shape.  I shall always be grateful to the writers and actors of this show for giving so much of themselves.  I highly recommend borrowing the DVD of the first season and following it through for the duration.  It doesn't get much better than this.
Posted by Patricia Ryan Madson at 5:37 PM