Day 155: It can all change in an instant 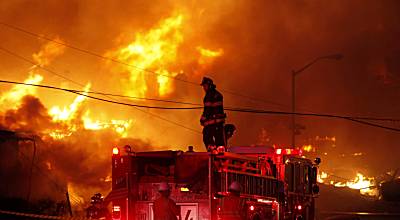 On Thursday evening Ron and I were walking on the beach near our home and we looked up at the eastern sky.  Over the San Bruno mountains was a large cloud of smoke.  Hmmm . . . looks like a fire we said.   We sauntered home and I began preparing a lovely dinner of Halibut, fresh peas and brown rice.  Turning on the television to catch the evening news and weather we were dumbstruck by images of a residential neighborhood, not 15 miles from our own home, that was consumed in flames.  It was later revealed that a large gas line had ruptured creating an instant fire of gigantic proportions.  We watched in horror as a whole community burst into flame.

Safe at home we felt fragile and aware of how quickly ones life can change forever.  It only makes sense to treasure each moment and never take for granted the privilege of our lives.  Our prayers are with the families who lost their homes and who are suffering in this tragedy.
Posted by Patricia Ryan Madson at 3:24 AM