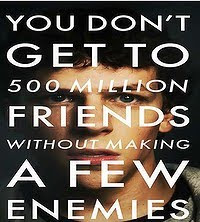 Last night the Stanford Film Society had a sneak preview of The Social Network.  This is the hot new movie which tells the story of the origins of Facebook.  The screenplay is by Aaron Sorkin (West Wing) and it is directed by David Fincher who did The Curious Case of Benjamin Button.
This is a big film that will be talked about all year.  I was taken with it and want to think about it before writing my review.  I'm off this morning to a press conference at Stanford to hear Sorkin and Fincher interviewed by Adam Tobin who teaches film at Stanford.