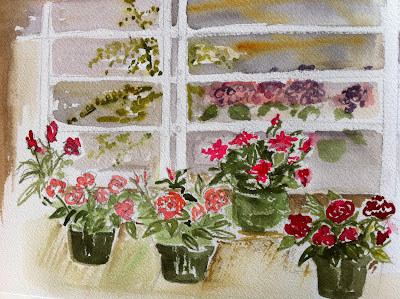 This past week I received the most remarkable letter and gift.  The handwritten number 10 envelope had a name and return address in New York City.  I didn't recognize the name.  When I opened the envelope the first thing that struck me was a personal check made out to me in the amount of $250 from the sender of the letter.  His typed letter, dated January 25, 2011 read as follows:

Dear Ms. Madson,
I just wanted to take the time to write a letter to you to let you know how much your book, "Improv Wisdom" influenced me.  On a surface level I am a musical theatre actor, and so technically I appreciated what you had to say! On a much deeper level I found that the "maxims" that you have outlined in the book really helped me to think about my life and the way that I approach each and every day!

Every time that I would read a chapter or a "maxim" principle, my soul was literally rejoicing and it began to really make sense to me what you were trying to convey.  I certainly don't claim to have a handle on it's entirety, of course.  However, it has motivated me to do forward and attempt to put those principles into practice in my own life.  The principles were like fresh water poured onto my soul.  I tend to be a rigid individual and even though I have been working on that, this book has been not only confirmation that I am heading in the right direction but also instrumental in my letting go and "just showing up"!  It is a book that brought such sweet conviction to my soul.

Now for the second reason that I am writing this letter.  No doubt you may have been a bit interested in what was in this envelope when you opened it.  I will attempt to explain this as seamlessly and quickly as possible.

I am a person of faith, and I am learning that money is energy and God in motion.  I attended a lecture last year given by Edwene Gaines, author of The Four Spiritual Laws of Prosperity. As she spoke about the first Spiritual Law of tithing I became interested in her words.  She instructed that our tithe should go wherever we receive our spiritual food.  She said often times that will be our spiritual home or church.  However, oftentimes you will receive your spiritual food from an artist, author, painter, waitress, etc.  Regardless of where your spiritual food comes from you simply need to tithe your money to where you are receiving spiritual food.

I am attempting to be faithful to that.  I have received much spiritual food from the work that you have produced and it has enlightened and encouraged me more than I can say.

When I first feel the call to do something like this the ego begins to be involved saying things like "Nathan, Ms Madson is going to think that you are a crazy person or, some sort of super fan!!"  What I have come to realize is that all of that ego talk doesn't really matter.  I could spend time here justifying why I am doing this, or giving examples as to why I am an appreciator of your work, and yet not a "crazy super fan", but frankly that's not what it's about.  It is about me returning provision where I have received spiritual food so as to do my part for the  continuing flow of the Universe.  I am simply the conduit that is being used for a greater purpose.

I have explained this as briefly and efficiently as possible.  I trust that you will be able to receive this gift not only in the spirit that it is given, but also as a manifestation from God/Goddess honoring he/her people when they step out in faith to do the work intended for them to do.

I pray continued peace and blessing upon you!
King regards.
(signature)

The gentleman who sent the letter, whose name will remain anonymous, kindly gave me permission to share the letter.  What a moving tribute.  I can only say I was speechless.  What a brilliant and sensible idea: to tithe in the direction of one's spiritual food.  Where do YOU receive your spiritual food?  Think about it.  And, my deep gratitude to the sender of the letter and gift.  I hope it is an inspiration to my readers.
Posted by Patricia Ryan Madson at 1:49 PM